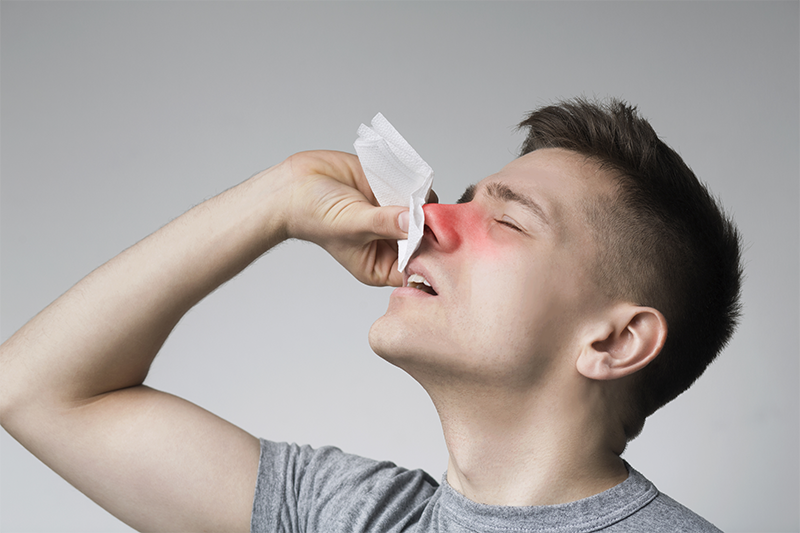 04 Feb How to Deal with a Stuffy Nose, Part One: Daytime Tactics

A stuffy nose can ruin your day and your night … but it doesn’t have to.

We have 25 tips on how to combat a stuffy nose, both at night — when clogged nostrils can disrupt the sleep your body needs to recover — and during the day. In Part 1, we’ll tackle the daytime issues.

What to do during the day

Taking steps to improve your nasal symptoms is crucial. Some of these tips can be used any time, including before bed. It’s up to you to decide which techniques and remedies best fit your needs.

1 Resist the urge to blow your nose

It’s normal to reach for the tissues when you have a stuffy nose. But blowing your nose isn’t actually recommended. Why?

Research has shown that it generates excess pressure in the nasal cavities that could cause fluid from your nose to go into your sinuses.

Instead of blowing, use a tissue to dab at a runny nose. If you absolutely must blow your nose, opt for one nostril at a time and blow gently.

Acupressure involves using your hands to activate certain pressure points. Although acupressure won’t cure your cold, it may help to relieve sinus pressure.

To target pressure in your sinuses, use your left and right index fingers to press on the base of either side of your nose. Hold for about three minutes.

For sinus headaches, press your fingers into the innermost corner of either eyebrow for three minutes.

When mucus is too thick, it can stick in your nose, aggravating congestion. Drinking enough fluids loosens mucus, which helps drain your sinuses.

If you have a cold, you should aim for a minimum daily fluid intake of around 11.5 cups (for women) to 15.5 cups (for men). You may need to drink more if you’re experiencing fever, vomiting, or diarrhea.

Capsaicin is a chemical compound found in chili peppers. It has a thinning effect on mucus. Foods containing capsaicin might offer mild, temporary relief of nasal congestion. However, capsaicin also stimulates mucus secretion, which could make your nose runnier.

Hot sauces, curries, and salsas typically contain capsaicin. You should avoid spicy food if you already have an upset stomach.

Decongestants are a type of medication. They relieve congestion by reducing swelling in the blood vessels in the nose.

Decongestants are sold over the counter as nasal sprays and oral medications. You don’t need a prescription to buy them, although you might want to consult a pharmacist or doctor if you have another medical condition or are taking other medications.

Decongestants are often combined with painkillers (analgesics) and antihistamines for maximum effect. Some daytime varieties include caffeine and may keep you awake.

There is no evidence that NSAIDs can effectively treat cough symptoms related to a runny nose. However, studies have shown that NSAIDs may be effective in treating other cold symptoms, such as:

Some NSAIDs are available without a prescription. Common types include ibuprofen (Motrin, Advil), naproxen (Aleve), and aspirin. Stomach acid pain is a common side effect.

When triggered, menthol receptors in the nose create the sensation that air is passing through. Though menthol doesn’t actually relieve nasal congestion, it can make breathing feeleasier.

Menthol may help with other cold symptoms, such as a cough or sore throat. Menthol lozenges are available over the counter and have few side effects.

If you already have a stuffy nose, drinking can make it worse. For approximately 3.4 percent of people, consuming alcohol triggers upper respiratory symptoms such as sneezing and a blocked or runny nose.

Alcohol is a diuretic, which means it increases urine production. When you drink, it’s more difficult to stay hydrated. When you’re dehydrated, your mucus is thicker and can’t drain as easily.

Alcohol can also have a negative impact on sleep. If you’re sick, it’s best to avoid alcohol altogether.

Caffeine is a stimulant found in tea, coffee, and soda. It can give you an energy boost when you’re feeling under the weather, but it may have a mild diuretic effect.

So, if you’re having difficulty staying hydrated with fluid, you don’t want to risk anything that could add to the potential of becoming dehydrated and forming thick mucus.

Caffeine and sleep don’t mix, either. According to a study in the Journal of Clinical Sleep Medicine, having caffeine up to six hours before bed can result in disruptive sleep.

10 Keep pets out of the bedroom

As sweet and loving as they may be, your pets may have a negative effect on the air quality in your bedroom. Cat and dog dander are common allergens that can trigger allergy symptoms, including congestion.

While it may take effort to keep your pets out of your room, it can help you breathe easier at night.

Tune in next week to learn more about fighting a stuffy nose during the nighttime—and learn when’s the right time to contact a doctor.