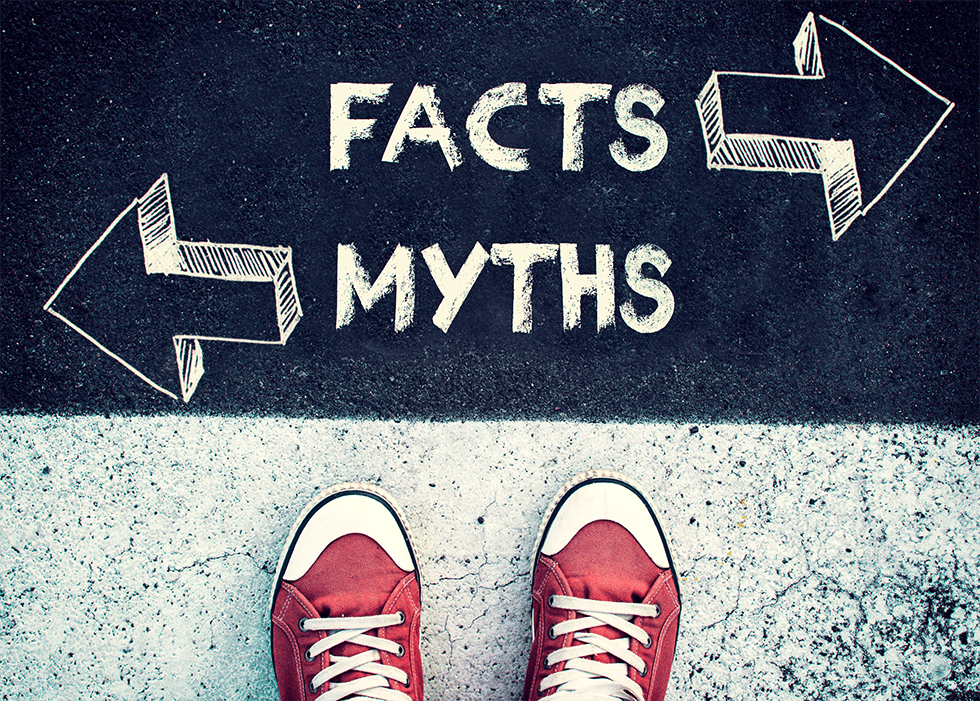 Being told you have a high risk of lung cancer or being diagnosed with it can leave you with a lot of questions. There’s a great deal of information — and misinformation — out there, and it can be hard to make sense of it all.

Below are 15 facts and 5 myths about lung cancer: its causes, survival rates, symptoms, and more. Some of these facts might be things you already know, but some might be surprising.

In 2015, there were almost 1.7 million deaths worldwide from lung cancer.

In the United States, lung cancer is the second-most common type of cancer

This means that lung cancer is often only caught in later stages.

This cough will probably get worse over time.

Smoking is the leading cause of lung cancer

Smokers should get yearly screenings

If you’re between 55 and 80 years old, smoked for at least 30 years, and either smoke now or quit less than 15 years ago, the U.S. Preventive Services Task Force recommends that you get yearly screenings for lung cancer. The main type of screening used is a low-dose CT scan.

Even if you’ve smoked for a long time, quitting now can significantly reduce your risk of getting lung cancer.

Radon is the second leading cause of lung cancer

Radon is a naturally occurring gas. Breathing it in exposes your lungs to small amounts of radiation. Radon can build up in your home, so radon testing is important.

African-American men are at a greater risk

Doctors can do genetic tests on your tumor, which tells them the specific ways the DNA in the tumor has mutated, or changed. This can help find a more targeted therapy.

There are four types of surgery for lung cancer

In some cases, only the tumor and a small part of the tissue around it is removed. In others, one of the five lobes of the lung is removed. If the tumor is close to the center of the chest, you might need an entire lung removed.

There are three types of lung cancer

They are: non-small cell, small cell, and lung carcinoid tumors. Non-small cell is the most common kind, accounting for about 85 percent of lung cancer.

It causes more deaths per year than colon, breast, and prostate cancers combined. This is true for both men and women.

Age and sex can both affect survival rates

In general, younger people and women have better survival rates.

You can’t get lung cancer if you don’t smoke

Once you’re a smoker, you can’t lower your risk of lung cancer

Even if you’ve smoked for a long time, quitting smoking can decrease your risk of lung cancer. Your lungs might have some permanent damage, but quitting will keep them from becoming even more damaged.

Even if you’ve already been diagnosed with lung cancer, quitting smoking can help you respond better to treatment. Plus, quitting smoking is good for your health in a lot of ways. But if you smoked for a long time, you should get screened, even if you quit.

Because lung cancer is often found in later stages, after it has already spread, it has a low five-year survival rate. But cancer in early stages is not only treatable, it’s even curable. And if your cancer isn’t curable, treatment can help extend your life and lessen your symptoms.

If you have any risk factors, talk to your doctor about screenings. These can help catch lung cancer earlier. You should also see your doctor if you have a cough that won’t go away and gets worse over time.

Lung cancer does often spread to other parts of the lung, the lymph nodes near the lung, and to other organs. However, surgery does not cause any type of cancer to spread. Instead, cancer spreads because the cells in tumors grow and multiply without being stopped by the body.

Surgery can actually cure lung cancer in its early stages, when it’s localized to the lungs or a small amount of nearby lymph nodes.

Only older adults get lung cancer

Lung cancer is much more common in people over 60 years old. However, that doesn’t mean that people under 60 never get it. If you’re currently 30 years old, for example, you have 0.16 percent chance of getting lung cancer over the next 20 years.

When you’re diagnosed with lung cancer, there’s a lot to learn and you have a lot of choices to make about your care. Work with your doctor to figure out what’s best for you. They’ll help you find the best course of treatment and can answer any other questions you might have. And if you’re a heavy smoker or have other risk factors for lung cancer, talk to your doctor about screenings and other preventive measures, including quitting smoking.