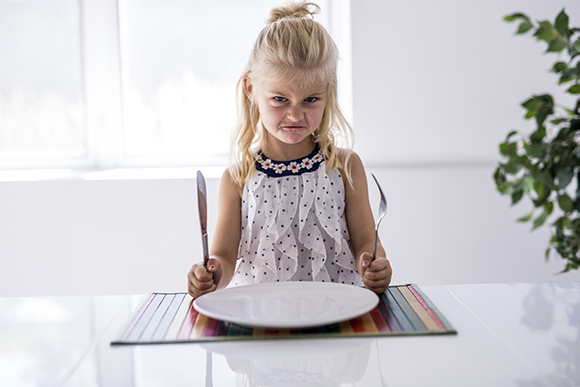 When you’re so hungry you’re hangry, there may be more causing those irritable feelings than your growling stomach.

We’ve all been there.

You can’t concentrate. You feel a headache piercing your skull. Your stomach is growling so loudly that everyone near you can hear it. And if you don’t get something to eat soon, you just might bite the head off of the next person who talks to you (and then chew it up and swallow it).

You’re “hangry” — that is, hungry and angry.

Toddlers may be the demographic most often associated with empty-bellied crankiness, but it’s a feeling that people of all ages experience. While a child’s meltdown will probably encourage Mom or Dad to feed her, how adults address their hunger is more complicated.

While hanger is unpleasant to experience — and potentially dangerous to anyone who crosses your path — it serves an important function.

“Your body wants to keep you alive,” explains Alyssa Ardolino, a registered dietitian from Reston, Virginia, who is also a mindful eating expert as well as the nutrition communications coordinator for the International Food Information Council.

Your body doesn’t know that you haven’t eaten lunch because you left your wallet at home or had to skip dinner to stay late at work to finish a project. All it knows is that it needs more energy, now.

“Your body is super smart, so if for some reason, you have a deficit of calories or are not eating consistently, it focuses on the main parts of the body that it needs to sustain,” such as the heart, the brain, and certain vital organs, Ardolino says.

Like toddlers, we are biochemically affected by our hunger and it impacts our behaviors. In this regard, the Snickers ad campaign tagline “You are not you when you’re hungry” is right on the nose.

She adds that impulsivity is also common when we’re hungry.

The science of hanger

A study from the University of North Carolina at Chapel Hill, published in the June 2018 issue of Emotion, shed more light on the precise conditions that produce hanger.

Psychology and neuroscience doctoral student Jennifer MacCormack and Kristen Lindquist, PhD, director of the Carolina Affective Science Lab and Associate Professor in the Department of Psychology and Neuroscience, conducted several experiments looking at the contexts in which hanger occurs.

MacCormack says their research set out to examine whether hunger automatically makes everyone more emotional, or if there’s more going on when people feel “hangry.”

In the first experiment, subjects who were either hungry or not hungry looked at a series of negative, positive, and neutral emotional pictures.

Following each emotional image, the English-speaking subjects were shown a Chinese letter or pictograph. (MacCormack explains that this particular stimulus was chosen because it was ambiguous for the subjects because none of them read or spoke Chinese.)

The subjects then rated how they felt and rated whether they thought the Chinese characters they had just seen depicted something good, bad, or neutral.

“What we found is that hunger only seemed to matter — or influenced people’s perceptual judgments about the Chinese pictographs — once they had seen the negative pictures beforehand,” MacCormack tells Healthline. “We think that suggests that if you’re in a positive situation or a neutral situation, maybe hunger is going to influence you a bit, but it’s not going to really become salient or influential in terms of you becoming ‘hangry’ or it biasing your perceptions.”

She adds, this could mean “that you’re more likely to use that hunger-induced negativity in a negative situation and maybe mistake or blame something in the environment as causing your negativity because it’s harder to distinguish whether [the negativity] is coming from the hunger or that stimuli in your environment.”

In other words, a negative context beforehand can specifically affect our perception when we’re hungry, but it may be so subtle that we don’t notice it.

Another UNC experiment asked subjects to either fast for five hours or more, or come to the lab after eating a full meal. Once at the lab, they were asked to write a story about emotions, or to write a story about an average day that was meant to be unemotional. Then the subjects did a visual perception task in which they looked at circles on a computer.

However, the visual perception task was programmed to appear as if the computer crashed at the end. At this point the experimenter would blame the participant, explaining they must’ve caused the crash.

MacCormack explains the fake computer crash and the ensuing blame were meant “to create this negative situation — a negative context that allowed people to use their hunger and see if they could become hangry.”

Once again, context proved important for hanger. People who had written stories about emotions, and thus had more emotional self-awareness in the moment, had a steadier keel.

The finding suggests hungry people who pay attention to their feelings, or are aware of them in the moment, may be able to reduce the chances of becoming hangry.

MacCormack noted emotional self-awareness can be a personality trait, as some people are simply more in touch with their feelings than others. However, she points out that becoming self-aware, or mindful, which is improved through meditation, can also be learned to an extent.

This can have potentially important applications for the management of hunger — and hanger.

Eating is always going to be an emotional situation

In addition to avoiding fake computer crashes, we can de-fang hanger by making smarter nutritional choices.

“Blood sugar management is basically key to anger management,” says Jessica Cording, a New York-based registered dietitian. “Some people just try to white-knuckle it [through hunger] and have a miserable day and make everyone around them miserable because they can’t just admit that they need to eat something.”

Cording suggests foods with a lot of carbohydrates, which produces the highest amount of blood sugar or blood glucose, should be eaten with protein or fat in order to slow digestion and leave people feeling satiated.

The trickiest meal of the day

Breakfast is a particularly tricky meal to navigate because our bodies have usually been without food for eight or more hours, and we may crave the sugary fullness of carbs. But Cording advises treading carefully during morning meals.

“If you’re having a morning meeting with your team, doughnuts are the worst choice because there’s so much sugar and it’s all these people talking about potentially touchy things. That’s a total recipe for hanger and not exactly the best for problem-solving,” she says.

Hunger and hanger are part of life and can’t be avoided entirely.

However, if you are feeling hangry more than once or twice a week, Cording recommends seeking assistance from a dietitian.

Nevertheless, while a dietitian can help with the nutritional aspects of hunger or hanger, both good and bad emotions will always be tied up in our experiences of food.

“Despite our efforts to try to make eating very black and white, eating is always going to be at least a partially emotional situation because, by and large, we don’t just eat to consume nutrients,” explains Ardolino. “A lot of the time, [food is] rooted in tradition. It’s an outing. It’s the atmosphere and the environment influences it.”

While we may not always be able to control when we’re hangry, understanding why it happens and what we can do to minimize it can help us better manage our grumpiness when our stomachs are growling in the future.